Malika Classic and Malika Prime are two modern hotels built in national style represent famous chain of Malika hotels in Uzbekistan.
Malika Prime hotel has a perfect location in the city center just 30 meters to the right of Gur-Emir Mausoleum.
Malika Classic is located next to the national houses where one can relax and have a cup of tee after a tiring sightseeing day in Samarkand. Hotels are distinguished for its pleasantly furnished rooms and delicious Uzbek cuisine.

Samarkand is situated in the valley of the river Zarafshan. It is the second largest city of Uzbekistan and is of the same age as the city of Babylon or Rome. The history of Samarkand is about 2,500 years old and has witnessed a lot of upheavals during the times of Alexander the Great, the Arabic Conquest, Genghis-Khan Conquest and lastly Tamerlane's.

Hence, the culture of Samarkand was developed and mixed together with the Iranian, Indian, Mongolian and a bit of the Western and Eastern cultures. Majestic and beautiful city Samarkand has a marvelous and attractive power. Poets and historians of the past called it "Rome of the East, The beauty of sublunary countries, The pearl of the Eastern Moslem World". Its advantageous geographical position in Zarafshan valley put the city to the first place among cities of the Central Asia. more 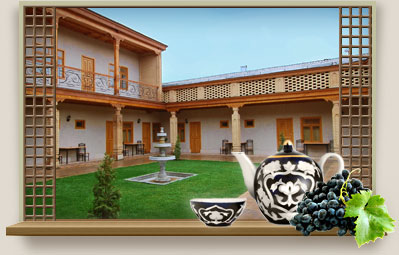